I’m close to finishing a pair of cross stitch projects, and I realised I still haven’t blogged about the last two I finished.

First up was a birthday present for my friend Emma. We’re both huge geeks so I wanted to make her something properly geeky. After much thinking I went with this: 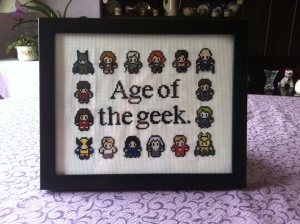 The characters round the outside represent eight different fandoms (Nolan’s Batman, The Hobbit, Harry Potter, The Avengers, Doctor Who, X-Men, Sherlock, and Merlin) and the quote in the middle is from Leverage. I used a pattern from XStitchMyHeart as the basis for the characters, and drafted the overall pattern myself. It was so much fun seeing the characters take shape, a truly enjoyable project.

Second was a birthday present for Edwina, Emma’s mum. I wanted to make her something lovely, but something with a purpose too so I decided to make a pin cushion (she’s a very skilled seamstress). I hunted around for a pattern and this was the end result: 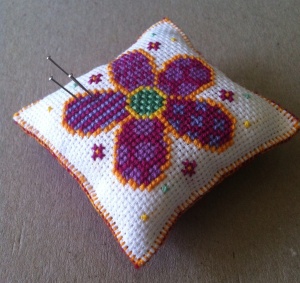 The pattern is a free Coats pattern, I used slightly different colours to their suggested ones, but kept the overall idea. I used felt as the backing, securing it with blanket stitch. I enjoyed making this lots, I think I will be making more pin cushions in the future – I need one myself, and I can think of a couple of other people who’d probably like one.

One thought on “Finished Objects.”