After writing my Theatre Thoughts post in September I thought I’d make it a semi regular feature, pulling together my thoughts about the various things I’ve been to see.

The Featherstonehaughs Draw on the Sketchbooks of Egon Schiele, Aberystwyth Arts Centre.

One of the real pleasures of living in Aberystwyth is having the Arts Centre on my doorstep, they have a wonderful range of productions on offer throughout the year and I’m trying hard to seize the opportunity to see a good variety of them. When I read the description of this performance I was intrigued and so booked a ticket to go and watch it. I didn’t know a lot about what to expect, and if I’m entirely honest if I had known a bit more about it I probably wouldn’t have gone. The production involved the dancers bringing the paintings of Egon Schiele to life, this involved the dancers moving from pose to pose to pose. For the first and last section of the performance they wore suits that were painted to reflect the characters in the art, their faces were also painted similarly. For the middle section the performers involved wore body stockings that were painted to outline the body parts they were covering. I found the whole performance a little too abstract for me, and the live music that accompanied it was far too loud and left me feeling on edge. All in all it was nice to try something different, but I think I’ll probably research things I haven’t heard of a little more before booking in the future. 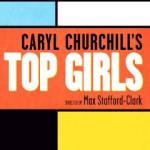 We were supposed to be seeing Matilda in October but unfortunately we were booked to see it in the previews which ended up being cancelled so we have to wait until next summer to see it. Rather than abandon the weekend we decided to give Top Girls a try – I’d been looking forward to seeing something at Trafalgar Studios again and knowing that Suranne Jones was in the play was enough to persuade us. It was very nice to go and see a play with no prior knowledge, and to come out at the end having had a wonderful evening. The play is in three acts, the first sees Marlene hosting a fantasy dinner party with all of the guests being notable women from throughout history. The second and third acts are more conventional, exploring more of Marlene’s life and the impact that success in one area has on others. All of the actresses involved were excellent, though I particularly rated the performances of Suranne Jones and Olivia Poulet.

In addition to plays, musicals and dance performances the Arts Centre is a venue used for music tours. I’m not entirely sure when I first became aware of The Magnets but I’d seen them make a few tv appearances and been very impressed by what I’d seen so I booked to see them as soon as I heard they were going to be playing. I was certainly not disappointed, the evening was an absolute delight from start to finish. The Magnets are an a capella group, they perform a range of music from current chart tunes to classics. There were far too many highlights to pick out just one, I left the Arts Centre on a complete musical high.

Only Men Aloud was probably the event I was looking forward to most, I should have seen them last year but the snow meant we couldn’t get there so it felt like I’d been waiting a long time for this. The evening was the first date on their Christmas tour, they performed a mixture of festive music and non seasonal repertoire. They sang a number of medleys including a beautiful Silent Night / I’ll Be Home For Christmas blend that left me with a little lump in the throat. I loved their rendition of Bui Doi, Moon River and of course their Tom Jones cover. I can’t write about seeing them without mentioning their impeccable styling, they each wore four different suits making it a very stylish evening. It was a pretty perfect evening, I’m already looking forward to their next tour.