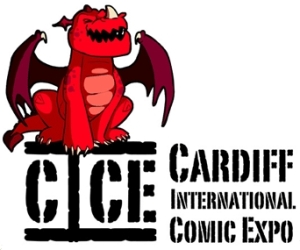 Over the last couple of years I’ve been trying to find my way into the somewhat confusing world of comics, I’ve been reading things that have been made into movies, found a few webcomics I love (though sadly I discovered two of them mere months before they finished for good) and followed recommendations lovely people on Twitter have been giving me. When I heard there was going to be a new comic expo in Cardiff it sounded like a great opportunity for me to go and pick up some new titles and explore a bit more.

Keeping to a budget is hard.
My first walk around the expo left me feeling a bit overwhelmed, there were tables full of colourful books waiting to be bought and I hadn’t heard of most of them. Behind each table sat someone who had a role in creating the books, the idea of speaking to one of them and revealing I knew nothing was more than a little scary. Knowing I had money saved specifically to spend in this room encouraged me to take another walk, and eventually I stopped at the Corvus Press table. They were selling issues #0 and #1 of The Baker Street Irregulars and sat behind the table was inker Patrick O’Connor. He was wonderfully friendly and I ended up walking away with both issues. Buoyed by the fact I’d managed to navigate a conversation I carried on and managed to spend the rest of my budget with relative ease.

In addition to the Baker Street Irregular issues, I bought Hero 9 – 5, Breathe and The Young Sherlock Holmes Adventures from Markosia, Arthur The Legend from Dalen and 10thology a collection of work by all Welsh creators. Expect to see reviews for all of these popping up over the next couple of months.

Whilst wandering around and trying to stretch my budget to its fullest I managed to nearly get run over by a Dalek on three separate occasions. Luckily for me they were in a good mood and didn’t appear keen to exterminate anybody.

Talks, talks and more talks.
In addition to the sales side of the Expo there was a full schedule of talks and panels. This was much more familiar ground to me, they tend to make up half of each day at the sci fi conventions I attend. I got organised before getting to the expo and had a list of the talks I wanted to go to, every one sounded good but I picked the ones I wanted to see the most.

Sidekickcast’s Secrets and Lies Live was the first panel I attended, a news quiz pitting a team of writers against a team of artists and both of them against the audience. It was a great start to the day, I laughed most of the way through it and Paul Cornell lead the writers’ team to a resounding win.

Matt Savage took the stage next, he’s a concept artist who has worked on films including The Dark Knight and X-Men: First Class, and Doctor Who – he was responsible for the redesign of the Daleks for the relaunch in 2005. He was a really interesting person to listen to, having pictures of his art to accompany what he was saying made for a really interesting panel.

Paul Cornell and Jimmy Broxton’s panel was excellent, fielding questions from the floor for the majority of the time they both proved to be really interesting to listen to. The discussion on how the comics industry is struggling to attract new young readers was of particular interest to me, the points they made have kept me thinking long past the event.

Mike Tucker and Mat Irvine took to the stage to talk about their time working for the BBC Special Effects unit. They have recently released a book chronicling the work the unit did over its lifetime, they talked through some of the photos that made it into the book and some that they’d had to leave out. The allotted 45 minutes flew by on this panel, I would have happily sat through another 45 minutes at least.

Creating Who? was the final panel and the one I’d been looking forward to the most. My ultimate dream would be to write tv tie in novels, particularly for one of the family of Doctor Who programmes. This panel was all about writing for Doctor Who outside of the tv programme and included comics’ writers and artists and Big Finish audio adventures’ authors. Sadly for me the person I was most looking forward to hearing from, Justin Richards who is Creative Director of the BBC Books range, was unable to attend. The panel was interesting, but ultimately a disappointment for me.

Looking forward to 2012.
I had a brilliant time at Cardiff International Comic Expo and I was thrilled to see them already advertising next year’s expo. I’ll definitely be booking my ticket.