This week’s Gallery was another fairly easy one for me, I’m starting to worry about how hard the next hard prompt is going to be! A Memory was the prompt set by Tara and straight away I thought of this picture. 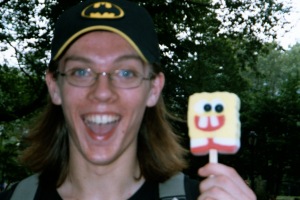 I spent a wonderful fortnight in New York with my brother a few years ago, this is him in Central Park. It’s not the best picture, it was taken on a 35mm camera and the photos were put onto cd badly by the company who processed the films. The memory though is vivid, my brother was obsessed at the time with Spongebob Squarepants and he was so excited by finding an ice cream version. It’s a picture I love looking back at, one of my absolute favourites.

6 thoughts on “The Gallery : A Memory”